Let me show you how much my Vegas trip set me back, and I’ll give you a few tips for enjoying your stay there. Also, check out my Instagram for pics from the trip.

The biggest savings were from the flight. I only spent $11.20 by using my miles earned from Amex Delta SkyMiles Gold Business. The sign-up bonus for me was 60,000 miles, and I ended up using 27,000 to get the flight. You could also say that I actually didn’t pay anything at all, since the bonus offer also included a $50 statement credit from any purchase from Delta. The $11.20 was for tax and fees, which triggered that credit! The flight from JFK to LAS and back cost $345 at the time of booking, so that’s how much I saved. One tool I always use when booking flights is Google Flights, which helps me make sure I’m getting the best price for the time frame I’m looking at. 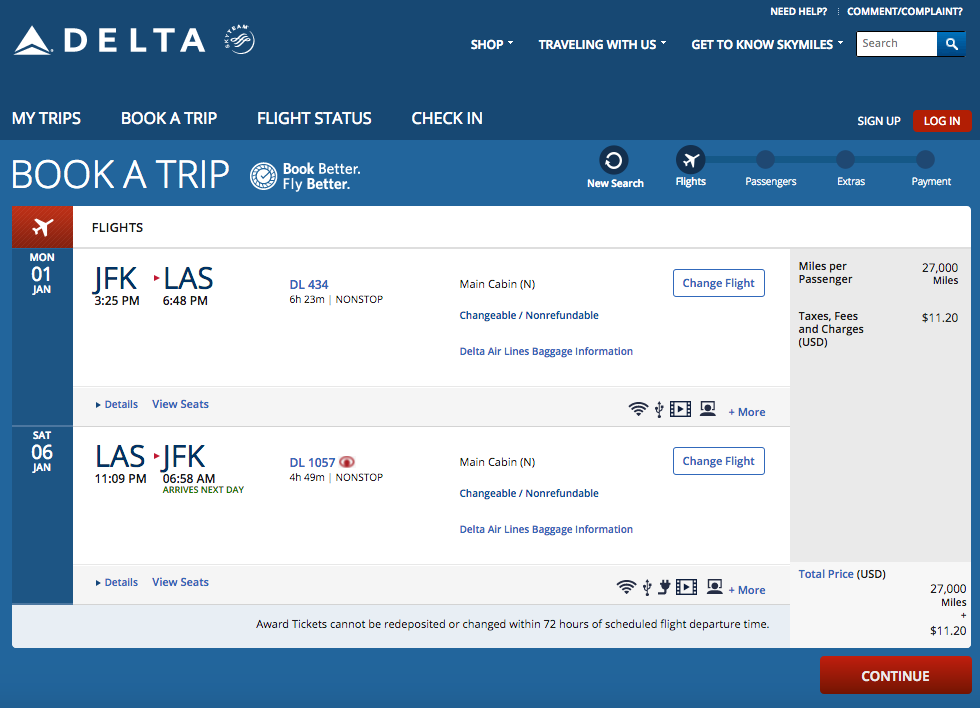 The reason why I used my Delta SkyMiles miles instead of Ultimate Rewards points from my Chase cards is that I find UR points to be much more valuable. They’re very flexible and can be used for various airlines. However, Delta miles can be hard to come by. The bonus from any American Express card can only be received once in a lifetime, and there’s only a few Delta credit cards. The Delta SkyMiles program is different from most airline rewards program, because the value is based on dollar price. Most airline rewards program have a flat mileage fare based on the route or distance. For example, any flight between two certain continents will cost the same number of miles. This is something you’ll have to look into when redeeming miles.

As for where to stay in Las Vegas, you want to stay on the strip. Think around The Venetian, Bellagio, and Caesars Palace. Now those particular places are probably the most expensive in the city. Other options are the lower end hotels like Harrah’s and Bally’s, but those come with a drop-off in quality. Thankfully, I found an option in between. It’s called The LINQ. It went under a massive renovation in 2014, so it’s nicely up to date. I actually liked that it’s smaller than the other Vegas hotels, because I could just go down the elevator and have everything I’d need in front of me. For example, there’s a small sports book right there in the lobby. It’s not popular enough for you to have to wait in line to make a bet. You can do all your other gambling there too, and all the attractions of the strip are still within walking distance. The LINQ doesn’t have a nightclub, but there’s plenty in the area. You’ll want to explore and check out different ones anyway. One nice perk of the hotel is that it has its own little promenade with shops and restaurants like In-N-Out. There’s also the High Roller at the end, which is the world’s tallest Ferris wheel. You get $10 off tickets when you buy at the box office inside the hotel and show a key card.

When you do your research for hotels in Las Vegas, you may be tempted to stay farther from the strip to save money. I strongly believe you’ll have a lot better time right on the strip. One place where you’ll see cheaper hotels is downtown around Fremont St. That’s the old Vegas strip, and it’s nothing like the one everyone thinks of. Yes, it might be less of a tourist trap, but I’m sure most tourists come to Las Vegas for something more exciting. That’s where locals tend to go to gamble, so you may consider that for less of a chance to get ripped off. It’s also a good place to pick up souvenirs. Personally, I checked out that strip downtown with my friends and didn’t care to stay for longer than a few minutes.

One thing you must be wary of before booking a hotel in Las Vegas is the resort fee. It seems that every hotel charges this. When looking through hotels, you have to look at the reviews to see what past guests have paid. You can probably ask the hotel, but that might take too long for checking out multiple hotels. For The LINQ, the resort fee was $34 per night on top of the nightly rate. For 5 nights, we paid $188.46 for a 2-bed room before the resort fee.

I booked the hotel on Hotwire. That’s where I found the best rate for this hotel. If you don’t know how Hotwire works, it doesn’t exactly show which hotel you’re booking. It just shows the rate and general location for any hotel available. Most of the time, it will say what the hotel was for the last person who booked. That’s the hotel you’re booking then. Also, booking through Hotwire is non-refundable.

If you are into clubbing, Las Vegas is definitely the place to be. Every famous DJ comes to perform here, and many have residencies at certain clubs. We arrived January 1, so we missed a ton of artists who performed on New Year’s Eve. We saw DJ Mustard at Marquee on the night we arrived, which was a Monday. Diplo was also performing at XS that night. We saw a DJ named Fergie the next night at Omnia, which was right across the street from our hotel. Zedd was performing there on Saturday night, but we left that day. We went to a club called Tao on Thursday. On Friday, we saw Steve Aoki at Hakkasan on Friday night. That was insane. NGHTMRE played there the next night, and Cash Cash was there on Sunday. Marshmello also performed on Friday at XS, and The Chainsmokers were there on Saturday. XS and Hakkasan are probably the clubs to go for the top DJs. Alright, here’s the best part. We got into all these clubs for free! All you have to do is find a promoter. There will be plenty out on the strip, but this may depend on the time of the year. I don’t think Vegas is as popular in the winter, so clubs probably need more promotion. You can also easily find promoters on the Yelp page for a club or even Instagram. This may not work if you don’t have females in your party though. Ideally, you have at least an equal ratio of males to females.

We took two day trips during our stay in Las Vegas. The first was to Antelope Canyon, which is one of the most Instagram worthy places in the world. You probably have seen pics on social media or even on screensavers. The issue is getting there, and there are very few tours coming from Las Vegas. We ended up going with one from Go123 Hopper that cost $615 for 3 people, and that seemed to be the cheapest option. As amazing as Antelope Canyon is, I’m not sure if it’s worth the price tag to go from Las Vegas. However, I didn’t know when the next time I’d be in the area. I will definitely try to visit again, but I’ll go to the upper canyon. I went to the lower canyon this time, and the upper canyon is where you can see the famous sunbeams shining down inside the cavern. A big issue was the weather. It wasn’t particularly cloudy when we went, but the lighting wasn’t the best inside. I would go around the summer time to make sure the sun is beaming down to get the best pics. I’m thinking that I’ll eventually take a road trip around the country and can stop by Antelope Canyon then. This will probably have to wait until I can be a digital nomad or reach financial independence.

The second tour was to the famous Grand Canyon, specifically the West Rim. That cost us $214 for 2 people with GC Tours. The bus ride itself was way better than the one for Antelope Canyon, since the driver provided colorful and informational commentary throughout. A delicious lunch was also provided during the allotted time of 3 hours to explore the West Rim. I would say Grand Canyon is worth visiting for that price, but you could save money on going to places like this and Antelope Canyon by renting a car. However, you’d have to deal with navigation and the long drive yourself. Getting to Antelope Canyon from Las Vegas can take around 5 hours or more, and getting to Grand Canyon isn’t far off in time. It may be more worthwhile to hit both in the same trip and stay the night within Arizona.

If I do have one vice that is definitely not financially smart, that’s gambling. Like I said here in my 2017 financial summary, I have gambled a lot in the past. The only gambling I did in Las Vegas was making a $300 bet on the Cleveland Cavaliers to become the 2017-2018 NBA champions at +550 or 5.5 to 1 odds. That means I’d win $1,650, and I’d have to come back to Vegas to collect that money plus what I put down. I think it’s good value, because LeBron James and the Cavs are pretty sure to at least make the Finals yet again. To take out cash for the bet, I just used a casino ATM. You probably have heard about the crazy fees for using one of those, but I never have to worry about ATM fees with my Charles Schwab checking account. The fee was $10, but it’ll be reimbursed to me by Schwab.

For food, I actually didn’t have much variety. I didn’t really come to Vegas to eat though. I ended up having 5 burgers from In-N-Out throughout the week, because I never get the chance to have it on the East Coast. It’s so good and cheap. I also had food twice from Eggslut, which is located at The Cosmopolitan. Their bacon, egg, and cheese sandwich is to die for. I’ve had it before in their Los Angeles location, and I had to have it again. Las Vegas is known for its fancy buffets, and I only got to go to one at The Cosmo called Wicked Spoon. It cost $36 for brunch before tax, but the selection was pretty amazing. Unfortunately, I was coming down with something and couldn’t eat as much as I’d like.

The whole trip ended up costing me individually roughly $500 besides the bet I made, and a majority of that was from the day trips. The cost of traveling outside of Las Vegas could be cut significantly by renting a car and splitting the expense within a group. You could say that I also lost about a week of salary though, since I get paid for remaining paid time off after severing from my employer. I do plan to leave this year after all. Oh, well. Life’s too short to get that tripped up, but I just wanted to show how opportunity cost is a very real thing. Even though I don’t need the money now to live on, I would have received it later on and could have used it to produce even more money through investment. Most people probably don’t even think about this, but my mind is extremely focused on financial independence and does pick up on it. Anyway, I still say that my trip was worth it. I had one of the best weeks of my life and got to spend it with friends. That itself is pretty much priceless, even though I still found ways to cut costs!